This week I’ve been working on a couple of pieces involving trees. This tree is only 3″ long (tall?) and was fairly quick to stitch.

Two more key fobs – one for the electricity meter cupboard key and the other for a set of house keys.

I made the mock water lily this morning and then painted the papier maché box with acrylic paint. I know that my lily is botanically incorrect but it was only a bit of fun. I haven’t permanently affixed it to the lid and I like the idea of a big blowsy flower on a box lid so I expect I’ll soon make another.

I needed a couple of key fobs so what else would I do but make them.

I apologise for the wordiness of this post – so unlike me!

I thoroughly enjoyed my day at Lesley Roberts‘ Zentangle workshop yesterday where I was one of four ladies who had signed up for this introductory course. The cost included the paper tiles, pen, and pencil that we would need for tangling during the day as well as several handout sheets of additional patterns with step by step illustrations (known as step-outs in the tangling community). Lesley demonstrated three patterns during the morning session and after each demonstration we had a go ourselves. We compared tiles when they were completely finished and it was interesting to see how we had interpreted the patterns quite differently to each other. In the afternoon we were given free reign to tangle whatever we fancied on another tile or two. There wasn’t much conversation while we were actually tangling but there was plenty of opportunity throughout the day to ask questions and for Lesley to guide us as well as for general chat.

Using a pen as fine as the one recommended (a Micron 01) made me go much more slowly than I had when I had tried tangling before the course and I found that I was making each stroke much more deliberately too. The narrow point also enables extremely fine detail to be tangled. I bought a pack of tiles and another pen from Lesley yesterday because I really like Pigma Micron pens anyway and although I’ll continue to tangle I don’t intend to buy any more tangling stuff for the time being. All the official Zentangle stuff has to be ordered from the USA in any case and p&p costs to the UK makes that a slightly prohibitive option but there are plenty of suggestions on the ‘net for alternative papers to use and last week I used a block of standard notelet squares which were ok for practising on. The couple of pieces I did last week that weren’t purely practice pieces I would now describe as tangle-inspired rather than true tangling but I’m ok with that – one of the reasons for doing this workshop was to find out if it might give me more focus for free-motion machine embroidery ideas and I think it will.

If you’ve ever considered taking up tangling but haven’t yet taken the plunge, I would certainly encourage you to do so and if possible attend a workshop. (The Zentangle website lists all the certified tutors with links to their contact details.) Saying that you ‘can’t draw’ is no excuse. As Lesley pointed out at the beginning of the class, if you can make a dot on paper, draw a line, an orb, and an s shape, you can also tangle. Anyone reading this post can probably write too and those four marks/symbols are used in handwriting so go tangle!

The first two images below are of the tiles I did yesterday and the third is of one I did this morning. 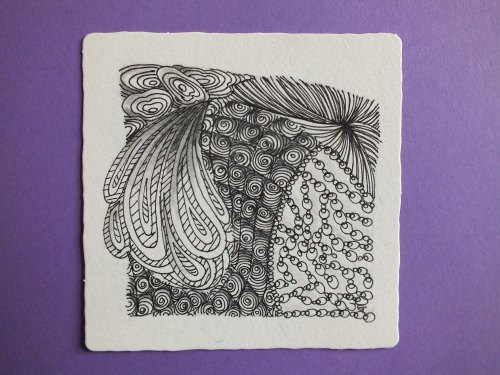 A new bag yes, but one that’s totally impractical for shopping purposes being only 4.5″ high and made from craft felt. OK, I was bored and this was all I could think of to keep myself occupied this morning when I wasn’t in the mood to do any hand embroidery. Of course I couldn’t leave it unadorned so I free-motion stitched a tree-like structure on both sides. I might use it as a repository for all those free-motion embroidery scraps that I don’t currently do anything with. It’s as good a use as any other. 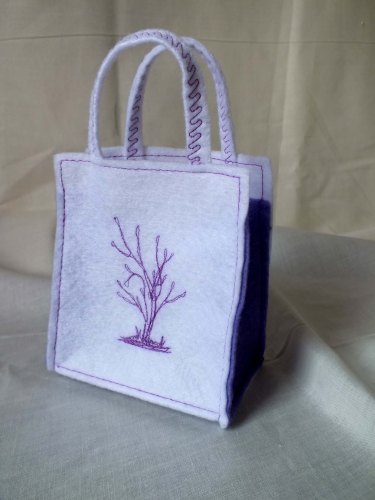 I was playing around with more free-motion machine embroidery yesterday but instead of just tossing the samples into a folder, I used them this afternoon to make two more tissue pockets. This evening I’ll be doing more shading practice before I attempt to hand embroider a flower or two from Trish Burr’s book, Needle Painting Embroidery.

The tissue holders are now made and I prefer the one with the children on it. I used sew-in interfacing on the blue fabric and lined it with quilting cotton which has given it a little more substance than the birdy one. The birdy version was lined with more of the outer fabric and is much softer. The pouch itself seems a little baggy but if I’d made it any smaller it might have been difficult to put the tissues into it. Because I hadn’t measured exactly where to place the children (duh!), they didn’t match up equally to the edge when folded in so I made that one as an open pouch but I think it’s much better and it shows off the lining nicely.

The floral panel was made to liven up the front of an otherwise extremely boring lightweight canvas shopper. I ironed freezer paper onto polycotton fabric then cut them to A4 size before printing the design in greyscale. I stitched it to a larger piece of identical fabric so that there would always be fabric in the hoop as I moved it around when free-motion embroidering. Trimmed to size when finished and edged with some satin ribbon. Something to do on a wet and windy Easter Sunday! 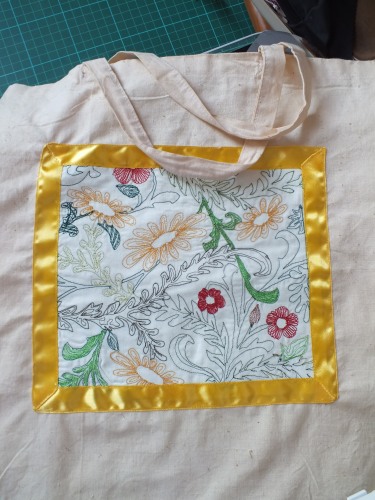 I had my cup of tea but didn’t made the tissue holder. I did cut out the lining though and then decided to stitch on that too so I guess I’ll have to make two tissue holders tomorrow. 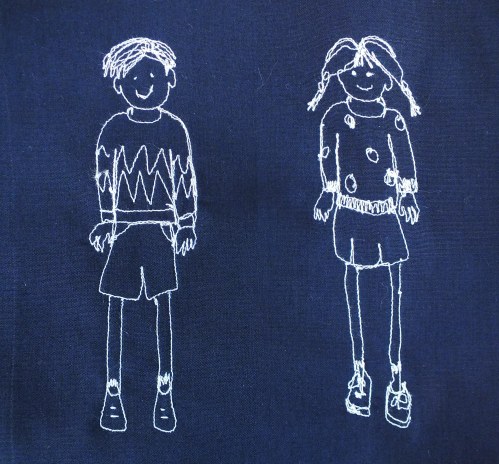 There are several things that I ought to be sewing/finishing this week but I took a small detour yesterday to do these birdy bits instead because I haven’t done any free-motion embroidery for a while and I had withdrawal symptoms.

The first one was made into a pocket tissue holder but I’m not happy with the finished product so I’ll cut it up and do something else with it. The caged bird is 6 x 5cm. The bird on the felt scrap is 3cm from tail-tip to beak and I like it best of all. Perhaps he’ll be made into a brooch. Perhaps he’ll just end up in the folder with all the other bits and pieces I sew. All free-motion machine embroidered. 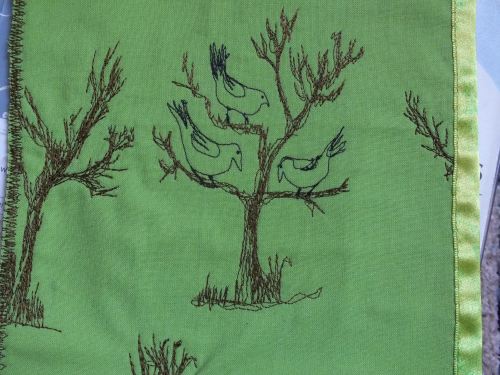 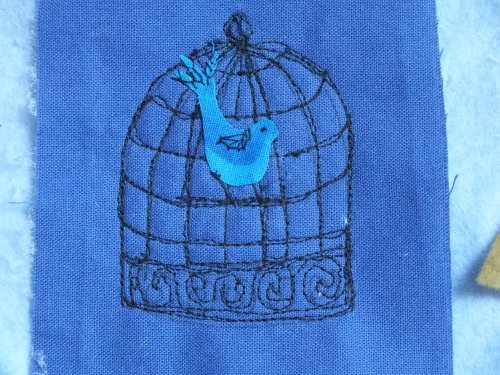 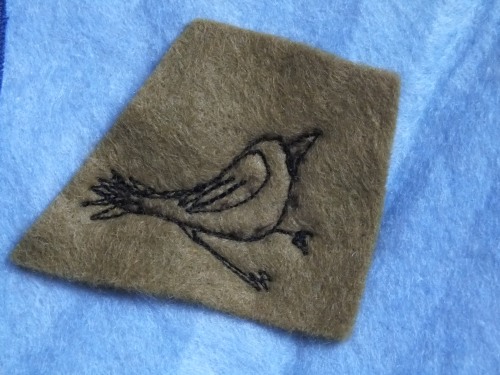 Appropriately enough, this month’s stitchy challenge was Autumn, but I have to admit that I struggled with this one. I had ideas in abundance but found them awkward to put down on paper, never mind express in stitches. When I did finally commit to stitching, the ideas morphed into something quite different but at least I’ve actually made tangible things this month: I now have a new case for my specs and a bookmark, although the bookmark is less likely to be used since I mainly read from a Kindle these days. The third piece, begun at the weekend, is at the ‘not sure if this is worth developing any further’ stage and since big sis emailed to say that she had completed her Autumn piece but had also struggled with hers, I feel let off the hook somewhat so I’m throwing in the towel for this challenge. 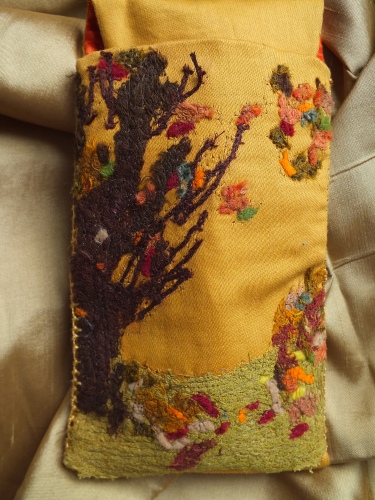 3rd piece – who knows what this will end up being? The leaves at the bottom are not yet (and may never be) attached. More free-motion machine embroidery  and appliqué with felt and cotton, and some done on water soluble fabric.