Here’s the little blue tit who may or may not grace the box lid together with a fat ball he’ll be hanging from. The bird is not quite finished (no beak, no feet, some turnings-under still to be done, no stuffing) and I’m not sure about the fat ball. This is the third version of a fat ball but I think it might be too high although it doesn’t look too bad in the image but I have a spare which I can reduce in size and compare.

The final side of the box of birds – the little dipper, keeping his feet dry on a rock in a river. The rocks are heavy duty interfacing covered with grey silk and a scrap of patterned polyester. 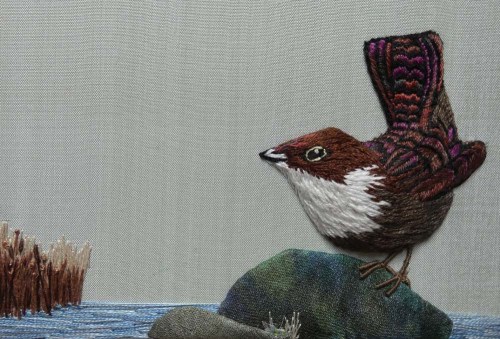 Panel number three is the pied wagtail, balancing on a fence post.

The fence: lollipop sticks cut to size with a craft knife and coloured with wax crayons. Posts connected with craft wire. The fence is held in place with a few stitches and a spot or two of fabric glue at the base of the posts.

Tendrils: thread dipped in fabric stiffener solution then wrapped around a wire. Uncoiled when dry and stab stitched to fabric.

Grasses: Chopped up scraps of free-machine embroidery from a few years ago.

The little nuthatch slip is now finished and I think I did right by leaving out the padding. 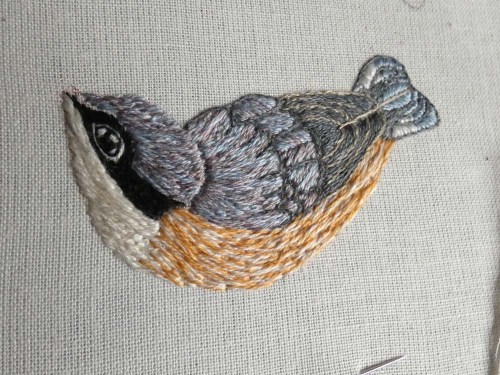 I’m calling this latest project ‘box of birds’ so that I can look back through my posts easily to remind myself how I solved any problems and to no-one’s surprise, there have been problems already! The bird on the left in the image below shows quite clearly the difference between having padding on the head, throat, and breast, and none on the wings, and when I’d finished them I thought the wings looked too flat. I had followed Lala’s instructions but her wings don’t look sunken so I’m not sure why mine do.

I’d already ripped out the throat and breast stitching once but only when I’d stitched them for a second time did I realise that the difficulty I’d been having with the roumanian couching was because I’d been attempting to stitch it with my left hand in the same way that a right-handed person would. (If you’re left-handed like me, you’ll appreciate the confusion between brain and hand that this causes!) Rather than rip them out again, it was quicker to just restart, stitch the couching correctly as a leftie, and omit the padding altogether to avoid the sunken wings look. The plan has always been to pad the birds when they’re being appliquéd to their eventual background as a slip, so the initial padding shouldn’t really be necessary.

If you’re interested in learning about the ‘slip’ technique, this video by Malina GM embroidery shows a slip being stitched and attached to a mitten, and The Floss Box also has a very good written tutorial.

My new project is a box with embroidered panels on the sides and top. Nothing like being ambitious – in three different ways no less! Raised embroidery slips will be appliqued to hand-painted and embroidered backgrounds, and last but not least, make the box itself. In my mind’s eye, it will all work out beautifully but the reality might fall a long way short.

I bought a sheet of greyboard from a local art shop to test my box-making skills and you can see the result below. I liked the construction method (a YouTube video) but my measuring was slightly off, even though I thought I was being extra careful – measure twice, cut once and all that, but for a first attempt it’s not all bad and I do have a usable container even if the lid is a bit wonky.

I like birds and I like stumpwork, so the box panels will each have a raised embroidered bird on them as well as some greenery. The first bird is a little nuthatch from Lala Ward’s Countryside Embroidery book again but I’m going to attempt to wing it (excuse the pun) and draw the rest myself.

I bought the following with a recent birthday gift voucher and I think one will form the basis of my next project although I’m not sure which one. Any suggestions?

I haven’t been able to find the post/article where I saw this book mentioned recently but I was intrigued enough to buy a copy. It’s a 1985 edition, mainly printed in black and white but the diagrams and photographs are very clear and seem easy to follow.

A idea for a modern style of raised embroidery on a casket/box has been brewing in my mind for a while and the following two books might help me formulate a proper plan.

The last item is a gel printing plate. I’ve got lots of acrylic paint and medium to turn it into fabric paint, and I’ve begun collecting things with textured surfaces to use as stencils and mark makers. Any successful printed fabric will be used for future textile projects – perhaps even for the covering of a box or a bag! My brayer will be wiped of paint onto my sketchbook pages to help avoid the dreaded blank page syndrome.

After six weeks blog silence I’m happy to be able to post about my stitching adventures once again.

The latest module for Sue Stone’s online course that I’m doing is about bringing to life the previous hand-stitched images we made with the addition of appliqué and further stitching. I wanted to keep my original image sample just as it is and instead chose the photograph of my mother that I’d used as the basis for the portrait quilt I made in 2015. (The quilt was made with the image in reverse.)

Sue gives suggestions on how to indicate hair using simple stitches but I was having difficulties interpreting her method for my photo even after several trial pieces so I opted for a sort of raised embroidery/stumpwork/appliqué combo, lightly padding some loosely woven crinkly fabric with strands of knitting yarn to indicate volume and then over-stitching with three different coloured strands of sewing machine thread in the needle to imitate the highlights of the hair. I will probably re-stitch the facial features at a later stage but the next thing to do is add appliqué for the clothes and background and embellish those with more hand stitching.

I added a few stitches yesterday and then thought that I ought to take a piccie before doing any more. I’ll post again as I do more to it so that Big Sis can see that it’s not just stuck in a cupboard!

The office I worked in twenty years ago had organised a coach trip to a stitch and craft show at the NEC in Birmingham and as Big Sis was visiting me at the time, we took the opportunity to go. She bought this Footpath to Quarndon Rowandean kit and I bought Barbara and Roy Hirst’s book Raised Embroidery. I have to own up to always wanting to stitch this. I think I badgered Big Sis into buying it, saying that it would be quick to stitch. Quicker than twenty years anyway! I haven’t given up on my own thirty-odd years old wip in case you were wondering. I keep it near and add some more stitches now and again so it too will eventually be finished – promise!

Hmmm. Yesterday I quite liked the detached buttonhole work on the owl’s body but today I didn’t like it at all even though it had taken several hours of stitching, so it just had to be ripped out, ready to stitch again more neatly. Just as well there’s no deadline for this!